Solar tax credits and you: What’s in the new climate change bill

Solar tax credits and you: What’s in the new climate change bill 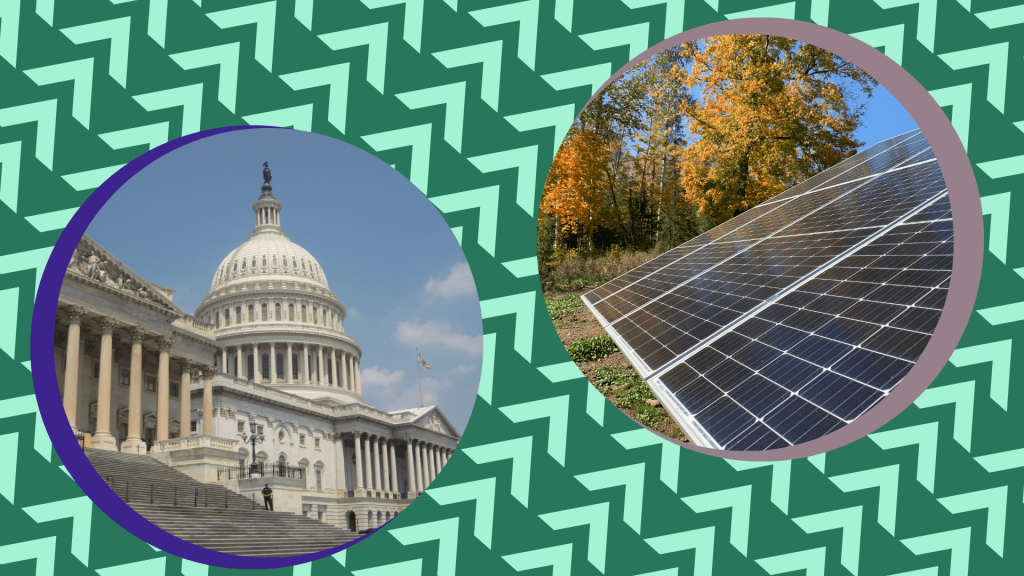 But the tax credits are just part of a larger package aimed at incentivizing adoption of clean and efficient energy devices included in the Inflation Reduction Act. In all, the legislation spends about $369 billion to address climate change, according to the Washington Post, making the largest such investment in the nation’s history.

And the legislation could have major implications for your pocketbook.

So what exactly is in the bill? A lot.

There are billions of dollars included in the legislation aimed at boosting clean energy, from electric cars to heat pumps and solar panels. It sets money aside for construction of high-voltage transmission lines, greenhouse gas reduction and grants for renewable energy projects in rural areas.

Here’s a breakdown of what’s in the Inflation Reduction Act and what it can mean for you.

As I just mentioned, the bill extends the solar Investment Tax Credit, which encourages homeowners to install solar systems by reducing their tax liability.

The tax credit was sitting at 26% of installation costs and was scheduled to go to 22% next year before being phased out for homeowners. The bill Biden signed Tuesday, Aug. 16, boosts the tax credit to 30% until 2032. Then it will drop to 26% and 22% in the following two years.

The bill also extended the tax credit to “stand-alone” battery systems. Previously, the batteries had to be installed within a year of the solar installation to qualify for the tax credit, according to Aurora Solar.

The extension should help continue a boom in solar energy installations by making systems more affordable.

Under the new law, developers can choose the production tax credit instead of the investment tax credit. Unlike the ITC, the PTC is a production-based incentive that offers a credit based on the amount of energy the system produces.

The new law also offers “bonuses” for commercial systems that use domestic products and for installing the system in an “energy community.”

For tax-exempt entities that were previously unable to take advantage of the tax credits, the law allows for “direct pay” incentives.

The Inflation Reduction Act also maintains a tax credit of $7,500 for new electric vehicles and creates a $4,000 tax credit for used ones, according to Consumer Reports.

The vehicles must meet certain domestic production standards to be eligible for the tax credit, according to the Washington Post. And more expensive EVs won’t qualify.

That could mean many EVs are not eligible for the tax credit, at least for now. Experts say it’s OK to wait for manufacturing to catch up with the demand, as the tax credit lasts until 2032. At the same time, the new law removes tax credit restrictions for manufacturers that sold more than 200,000 electric vehicles.

Here’s a list of vehicles that CBS News says “likely” qualify for the tax credit.

Meanwhile, the price tag for EVs like the Chevy Bolt have been dropping, according to Car and Driver. Though electric-powered cars typically have a higher price tag than traditional gas guzzlers, EV drivers can expect fewer ongoing costs like oil changes and tuneups.

Shifting drivers to electric vehicles will be critical in fighting climate change. The transportation sector is the largest emitter of greenhouse gases in the U.S. just ahead of electrical generation, according to the Environmental Protection Agency.

The bill provides more than $8 billion for energy efficiency rebates, according to NPR. Lower and middle-income homeowners that install a heat pump could be eligible for a rebate of up to $8,000, for instance.

Despite their name, heat pumps can cool your home as well as heat it. They “can reduce your electricity use for heating by approximately 50% compared to electric resistance heating such as furnaces and baseboard heaters,” according to the U.S. Department of Energy. That makes them an efficient option for keeping your home warm or cool.

The rebates will come from state programs that haven’t been set up yet, so sit tight for more details on that.

The bill also “restores and greatly increases tax credits for heat pumps and smaller home improvements,” according to the American Council for an Energy-Efficient Economy.

“These credits will take effect immediately, meaning households can claim the credit for purchases they make today. Households can also claim these credits multiple times, for instance if they buy new windows for the living room this year and for the dining room next year,” the Department of Energy says.

As we’ve discussed before, making your home more energy efficient can help reduce the amount of solar panels you’d need to offset your energy usage.

The Inflation Reduction Act also includes $60 billion for “incentives and financing for boosting domestic manufacturing of clean energy technologies,” according to Vox. The manufacturing boost includes a 30% tax credit for investments in facilities and equipment, according to the SEIA.

“Most of those incentives will go to accelerating US manufacturing of solar panels, wind turbines, batteries, and critical minerals, and to help build the facilities that would make electric vehicles,” Vox adds.

China is the world’s main supplier of the silicon raw materials and components that make up solar panels, according to S&P Global. And trade interruptions have hampered the supply of solar panels in recent months.

The legislation also includes $500 million for the Defense Production Act, some of which the SEIA says can be used to boost solar manufacturing. The Defense Production Act “allows the president, largely through executive order, to direct private companies to prioritize orders from the federal government,” according to the Council on Foreign Relations.

The bill also includes $50 million in competitive grants “to pay forest landowners for practices that increase carbon removal on private lands,” according to the Bipartisan Policy Center.

It also increases the credit for purchasing large, “clean” commercial vehicles to $40,000. And it includes $5.8 billion to reduce emissions from “energy intensive industries,” according to the BPC, including the production of iron, steel, concrete and paper.

The bill provides $2 billion for REAP, otherwise known as the Rural Energy for America Program. That’s a program through the U.S. Department of Agriculture that provides funding to agricultural producers and small business located in rural areas for renewable energy systems or energy efficiency improvements.

The federal government is making a big investment in clean and efficient energy technologies that can also put money back in your pocketbook. We in the industry were focused on the solar tax credits, but there’s plenty more in this legislation to be excited about.

To learn more about these programs and how you can benefit, give us a shout!