Designing a new home with solar panels: A guide to maximizing your system

Designing a new home with solar panels: A guide to maximizing your system 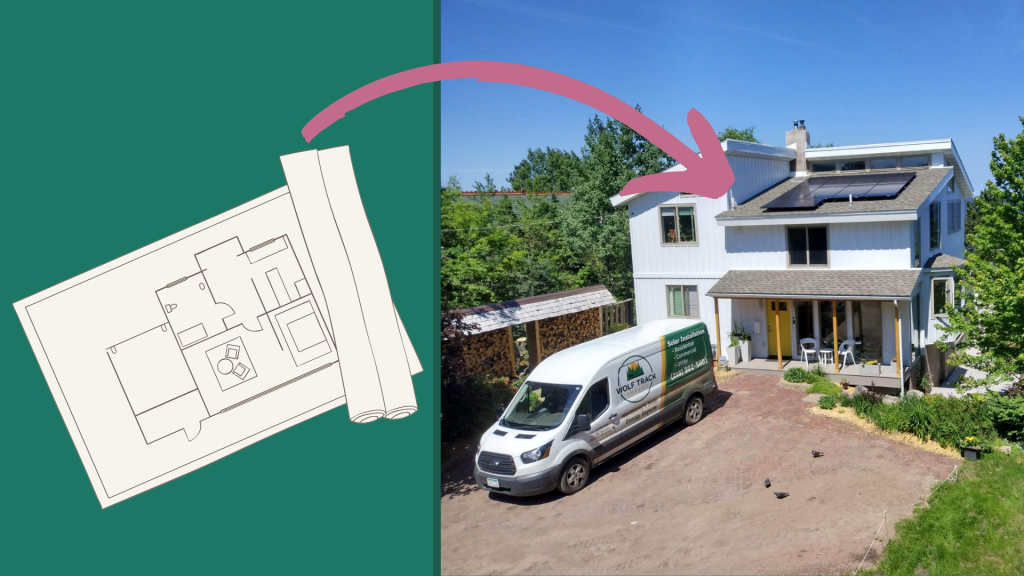 Most of the time, people contact us looking for help putting solar panels on their existing house. But sometimes, we’re asked to consult when somebody is building a new home with solar panels.

Installing a solar system a new home can make a lot of sense. After all, the home can be designed in a way that maximizes the panels’ production. And in some places, it’s the law. California requires new homes to have a solar system installed on them, unless it sees a lot of shade.

While energy production depends in large part on the site’s location, there are things a homeowner can do ahead of time to make the most out of their solar system.

In this blog, we’ll break down some things to consider before designing a solar-ready home.

With existing homes, it’s usually pretty easy to determine how much energy the customer uses.

Power companies often have a chart right on the bill that shows how much energy the customer has used over the past year. That allows installers like us to design a system and predict how much of their energy will be offset by the solar panels.

With a new home, we can’t rely on any billing history to tell us how much energy the home will use.

In that case, we can make an educated guess about future energy usage based on the devices that will be in the house. That could involve developing a list of energy-intensive appliances, such as hot water heaters, stoves, space heaters and air conditioners to start estimating future energy usage.

One way to do that is by getting the specifications of the devices that will be in the home, determining their rated wattage and estimating how many hours they’ll be on during a given timeframe. That will give us the kilowatt-hours consumed by that device. Remember that kilowatt-hours is the unit the power company uses to determine your electricity bill.

Assuming that the solar panels will go on the roof rather than the ground, the design of the roof will be critical in determining the amount of energy produced by the new home’s solar system.

Ideally, the roof will face south with a pitch somewhere between 30 to 45 degrees, according to EnergySage. Solar panels work best when they’re pointed directly at the sun.

Since the sun is in the southern half of the sky in the Duluth area, it’s best to have panels pointed south. The angle of the sun is constantly changing throughout the year, so a common fixed rooftop system will have an “ideal” pitch for only part of the year.

But as we’ve demonstrated before, changing the roof pitch doesn’t make a drastic difference in production.

That being said, we’ve installed solar panels on east/west facing roofs and ones with less-than-ideal pitches. A qualified solar installer should be able to walk you through the pros and cons of different home designs. From there, it’s up to you to weigh whether having a south-facing roof is worth changing up your plans for that extra solar production.

Another item to consider when building a new home with solar panels is any obstructions that might limit the number of panels that can fit on the roof.

Common obstructions we run into include roof vents, chimneys, satellite dishes and dormers. Designing a house with these obstructions on a roof that won’t include solar panels will help your installer maximize the roof space.

For instance, putting that nice wood stove on the north side of the house instead of the south side will ensure that the chimney won’t reduce your usable roof space or cause shading issues.

Solar panels we commonly install run about 20 square feet each, meaning a common 6 kW system will cover about 300 square feet of your roof.

We can’t cover every square inch of the roof in solar panels, however, as building code requires we leave room for walkways alongside the array and at the roof ridge.

Speaking of shading, tree cover can drastically limit solar production. If you’re planning to build a new home with solar panels on the roof, it’s best to pick a spot with few trees nearby or budget for a tree removal/trimming service.

You don’t necessarily need an open field to install solar panels, but a qualified solar installer should be able to consult with you on which trees should be pared back to maximize production and savings.

Some people may be conflicted about tearing down trees to make way for solar panels. After all, customers often cite the environmental benefits of solar panels for installing them in the first place. Doesn’t tree removal negate the clean energy the panels generate?

However, EnergySage found that the amount of renewable energy produced by a solar system over its lifetime should easily outweigh the amount of carbon dioxide trapped by a tree. So at least by one measure, solar is a net plus on the environment in this situation.

Increasingly, people are looking for solar systems that are paired with batteries. If you’re designing a new home with batteries in mind, it’s a good idea to leave some space in a utility area for energy storage.

Electrical code requires leaving some space around electrical devices in your home. The National Electrical Code, which guides all of our installations, “requires a clear space of “at least 30 inches wide and 36 inches deep if the equipment is likely to be worked on while energized,” according to the National Fire Protection Association, which publishes the NEC.

You’re also going to want a heated space for lithium batteries. Enphase, for one, tells installers to place their batteries in a space that’s at least five degrees Fahrenheit. (The “optimum” temperature is between 32 and 86 degrees). That means they shouldn’t be outside in our climate.

A great place for a battery would be in a heated utility room near the electrical panel. That way, there’s a shorter and less complicated wire run from the batteries to the panel.

Speaking of wires, it’ll be a lot easier to install the system if there’s an existing path for the wires to run from your roof to wherever your system is tying into the grid.

The video below does a good job explaining the advantages of pre-wiring the home for solar before the drywall has been installed.

The National Association of Home Builders also recommends setting aside a spot in your electrical panel for a dual-pole solar circuit breaker.

Solar installers don’t necessarily have to tie the system into the panel, as SunWatts explains. Your solar installer will be able to advise you on the best method for your situation.

Hopefully this blog post gave you a better understanding of how to prepare your new home to include solar panels.

One last piece of advice: Get in touch with a solar installer as you’re designing the home to get their input. Establishing that communication should help reduce surprises down the line.