Bifacial solar panels: Are two sides better than one?

Bifacial solar panels: Are two sides better than one? 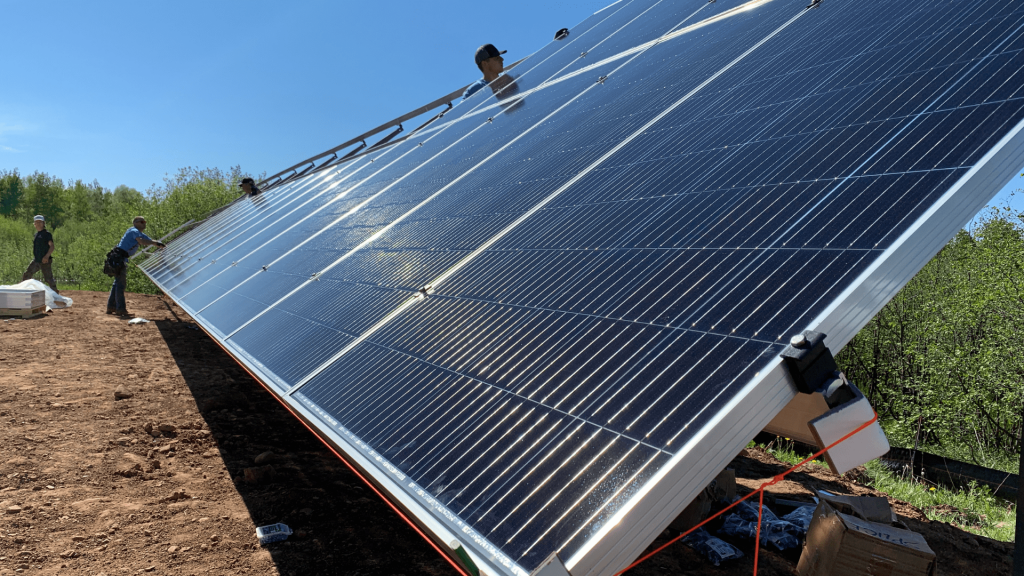 Traditional solar panels work best when pointed directly at the sun. But what if you could put cells on the back of the panel? Now we’re talking about an emerging technology called bifacial solar panels.

Bifacial solar panels improve performance by capturing any extra sunlight that may be reflected onto the backside of the panels. Studies have shown energy production can improve by 9% using bifacial panels.

That improvement is especially noticeable with snow on the ground. Snow is actually pretty reflective, so bifacial systems could excel in climates like ours.

Bifacial panels aren’t suited for every application, however, and you’re more likely to find them in large commercial or utility-scale projects.

Let’s talk a little bit more about the ins and outs of bifacial solar panels.

While traditional panels have some sort of covering on the back of the solar cells, bifacial ones expose both sides of the cell, according to Solar Power World.

It may seem counterintuitive to put solar cells on the back of a panel. After all, sunlight is coming from the opposite direction. How are you supposed to convert shade into electricity?

The answer lies in “albedo,” which is a measurement of a surface’s reflectivity. If a surface reflects all of the light shining on it, then the albedo is 1, according to NASA.

Researchers from the National Renewable Energy Laboratory have been testing the albedo of various surfaces as part of a three-year study of bifacial modules. But they’ve already found that snow cover helps boost energy production.

That’s because snow is reflective and has a high albedo. You’ve probably been outside on a sunny winter’s day after a fresh snowfall and realized you need sunglasses!

By increasing energy production, NREL researchers say it can help reduce the needed number of panels for a system. That means fewer components that come with panels, such as inverters and racking.

That extra energy production comes with a cost though. While the cost of manufacturing the solar cells is comparable to a one-sided panel, there are extra components involved in bifacial panels that make them about 10% more expensive.

“You’re going to a slightly more expensive package. You have to do something different on the backside—either glass or clear, transparent plastic,” says NREL researcher Chris Deline.

Still, bifacial panels are expected to pick up steam in the solar marketplace. In 2018, they represented just 10% of the world market share. But they’re expected to overtake one-sided (or monofacial) panels by 2029, according to another NREL report.

Other projections are not as optimistic, but analysts seem to agree that bifacial modules are poised for serious growth.

Recently, the Biden administration decided to continue exempting bifacial panels from import tariffs, a move praised by the Solar Energy Industries Association. The group’s president and CEO called bifacial panels an “innovative technology” that will help improve power output at a time when the U.S. is focused on producing clean energy.

Bifacial solar panels have their limitations, however. As Solar Power World points out, they wouldn’t be able to take advantage of reflected light if they’re installed flush to a roof top. Instead, they’re better suited to flat commercial roofs and ground-mount applications.

Moreover, “the industry lacks data on the long-term output from bifacial projects,” according to Greentech Media. That can complicate financing for large projects.

But signs are pointing up for bifacial panels as they become more commonplace. They’ve already made their way to the Northland: One of our large commercial projects in 2021 featured bifacial panels, and Heliene, a Canadian solar panel manufacturer with a plant on the Iron Range, makes bifacial panels.

If you’re curious about bifacial solar panels and whether they would be right for your project, don’t hesitate to reach out.